When the music's over

The internet is a funny place.

Many years ago - before Twitter, before Facebook, before fancy web forums - those in the know hung out on Usenet. It's a simple and robust way of distributing messages amongst groups of like minded people, and it's still there if you know where to look and have a certain amount of tech savvy to set up a news reader (or the bloody minded determination to use Google Groups).

One of the groups that I was part of at that time was uk.games.video.misc - an eclectic group of gamers who (mostly) managed to transcend the usual format wars and console advocacy (usually by owning every possible console) and spent their time discussing anything and everything from obscure Japanese role playing games to the best place to get a scart switch to plans for the weekend. It was a true mini-community, with the common factor of a shared interest in games linking a diverse collection of people.

Any group has its share of regulars, and one of those was Owen - known as The Rev or ThatRevChap or some variant along those lines. He wrote with wit and style about his favourite games, was always willing to offer advice and help and frequently arranged multi-player meet ups for the sheer joy of playing games with people who enjoyed playing for its own sake.

In recent years he has been writing an excellent blog to keep a record of what he has been playing on his iPhone and other platforms, and it is worth browsing his series of posts on his voyage of discovery in Minecraft. He was a regular on Twitter too, and he always had games of Carcassonne and Words with Friends on the go.

He died yesterday, out of the blue.

He'd posted a grumpy message the other day about having a chest infection and breathing difficulties, and begrudging the time off work. The next thing we heard was that he'd had a heart attack and the paramedics hadn't been able to save him. He leaves behind a wife who he'd met online and who had travelled across an ocean so they could be together.

Farewell big fella. It was a joy and privilege to read all of your posts and to play games with you. You will be missed. The world is a less fun place today.

Game over man, game over. 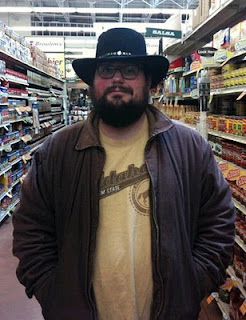 Email ThisBlogThis!Share to TwitterShare to FacebookShare to Pinterest
Labels: daily

It's always the good ones. Which is rubbish.

That last line has me all choked up :(